Research in the Kapheim lab centers on the evolution of phenotypic plasticity, particularly as it applies to social behavior in bees. Our primary research objectives are to gain insights about the mechanistic underpinnings of variation in behavior, and to use these insights to investigate the evolutionary processes governing the origins, maintenance, and elaboration of social organization. We investigate these mechanisms at three levels of influence: 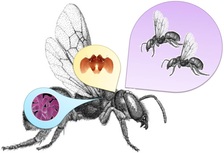 Figure adapted from original images by Matt McNeil and Schwarz et al. 2007 Ann Rev Entomol
Comparative evolutionary genomics
Eusociality has evolved several times in the insect order Hymenoptera, but it is unknown whether these independent origins are derived from common evolutionary processes. We investigate the genomic underpinnings of (1) the transition from solitary life to basic forms of eusociality and (2) the transition from basic to more complex forms of eusociality in three different families of bees. We attempt to identify individual genes, gene regulatory regions, and gene networks that are evolving in association with each of these transitions. We further interrogate these genomic features to evaluate the role of natural selection and selection-mimicking neutral processes, such as recombination and mutational hotspots, in sociogenomic evolution.

Neuro-molecular evolution of reward
Solitary insects forage to build strength and reproductive opportunity for themselves, but social insect workers forage to provide these benefits to their nestmates. This suggests the highly conserved neurobiological link between food, reproductive status, and reward response may have been co-opted during social evolution. We use comparative transcriptomics and behavioral experiments to investigate reward response in relation to variation in social and reproductive behavior within and between species.

Workers of social species, like these bumble bees (Bombus impatiens) [left] forage for their nestmates, but solitary insects, like this alfalfa leaf-cutter bee (Megachile rotundata) [right], forage for themselves. Illustrations by Julie Johnson, Life Science Studios.
Host-symbiont dynamics and social behavior
Bacterial residents of animal guts (i.e. the gut microbiome) are emerging as important sources of variation in host metabolism, immunity, and behavior. The close association between diet, physiology, and social behavior creates the potential for a role of host-symbiont dynamics in social evolution. Differences in the community composition of gut bacteria may influence individual variation in social behavior, and reciprocally, variation in diet and reproductive behavior among queens and workers may influence the gut microbiome. We recently found support for this hypothesis in honey bees (Apis mellifera), and plan to test this hypothesis in additional species that vary in social organization. Work on this project will include comparative metagenomics and behavioral experiments.

Honey bee (Apis mellifera) castes exhibit extreme differences in behavior, physiology, and diet. Some of these differences are reflected in the structure and pollen content of their hindguts. From left to right: forager, nurse, queen, and male honey bee hind guts.
Maternal behavior and the evolutionary origins of eusociality
The social environment has been theoretically demonstrated to be an important force in the evolutionary trajectory of socially expressed traits, yet empirical studies are lacking. Our previous work has demonstrated that nest foundresses of the tropical sweat bee, Megalopta genalis, can influence whether their daughters become sterile workers or future queens by manipulating the quantity and quality of larval diet. We study the physiological, transcriptomic, and adaptive basis of this variation in maternal behavior and its effects on offspring helping behavior to test the hypothesis that maternal manipulation has been an important target of selection in the evolution of eusociality.

Megalopta genalis is an excellent model organism for the study of social evolution, because solitary and eusocial nests coexist on Barro Colorado Island, Panama [left]. Variation in larval provisions may influence the social behavior of adult bees (right]. Illustrations by Julie Johnson, Life Science Studios.
Genetic assimilation as a driver of social evolution
Phenotypic plasticity is a potentially important driver of evolution, but the processes by which environmental cues induce novel phenotypes and affect fitness are not well understood, particularly for cues from the social environment. We study the processes by which the social environment generates novel phenotypes and investigate the role of plasticity as an agent of evolutionary change, using the evolution of eusociality among bees as a case study. This research involves comparisons between facultatively eusocial bees (Megalopta genalis) and solitary bees (Nomia melanderi) within the family Halictidae.

Social heterosis and the social genome
Genetic effects of the social environment can influence the evolutionary trajectory of complex phenotypes. In collaboration with Peter Nonacs (UCLA), we have modeled the maintenance of genetic diversity through intergenomic epistasis. We call this social heterosis, because interacting individuals gain fitness benefits through genetic variation across different genomes at a single locus or across entire genomes. When social heterosis affects whole genomes, allelic diversity is maintained as sets of complementary (i.e. social) genomes emerge among interacting individuals. Our results match many established patterns of HIV progression, and make several novel predictions that would be otherwise masked by traditional models of disease evolution.